I’mnot one for sensationalism, but my gosh, when multiple news sources arereporting that the much anticipated renewable energy stimulus packagewill is going to be for the massive amount of 3 trillion yuan ($440 billion),its hard to resist.  The amount is startling, considering that is isthree quarters the size the economy-wide stimulus plan announced lastNovember.  No details have been given about the allocation of thesefunds; the news reports are saying a focus on wind, given the recenttripling of wind energy targets in 2020 to 20 GW installed capacity.

But given the size of the funds, one must really wonder if this isgoing to be a big handout to the nuclear industry, which itselfbenefited from a national target boost to 70 GW installed capacity by2020, or big hydro for that matter.  Unlike the November stimuluspackage, which was meant to be a short term boost for industry, thisrenewable energy package seems to be more far-sighted money, meant tobe deployed over time from now till 2020.  $440 billion is still quitea large sum considering that National Energy Bureau division chiefLiang Zhiping was recently quoted as saying that a sum of $190 billion was needed to realize China’s 2020 renewable energy targets, but more consistent than the forecast by New Energy Financelast year that $398 billion (or $268 billion excluding big hydro) isneeded.  Then again, we also don’t to what extent nuclear, big hydroand grid infrastructure figure into the $440 billion on $190 billionnumbers (they do not in NEF’s $268 billion forecast), so its all veryhard to say.

Another Chinese reportsuggests that the package will actually be 4.5 trillion yuan ($660billion) and tied to higher national targets than most reports aresuggesting (150 GW for wind, 20 GW for solar, 80 GW for nuclear). Although most reports I’ve seen is consistent with the 3 trillion yuanamount, more than one personal contacts in China tell me that they’veheard it will be closer to 4.5 trillion.  Indeed, this China Daily articlesuggests that 3 trillion would be invested in 3 years, and that moremoney will be needed to sustain development till 2020.  The plan’sdetails will presumably be released once State Council approval on theplan is given, which officials have indicated will be “very soon.” This is all good news, but will there be room in that budget for energyefficiency? If not, that would be a missed opportunity indeed. 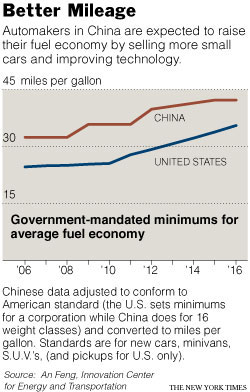 The New York Times reports that Chinese regulators are considering a plan that will raise auto fuel efficiency standards by 18% by 2015. Because China measures fuel efficiency differently from the U.S., atrue apple-to-apples comparison is difficult (see text to graphic onright).  However, one expert “estimated that the average new car,minivan or sport utility vehicle in China already gets the equivalentof 35.8 miles a gallon this year based on the American measurementsystem of corporate averages and will be required to get 42.2 miles agallon in 2015.”  In contrast, the fuel efficiency standards in theU.S. were raised by President Obama two weeks ago to achieve 35.5 milesa gallon by 2016.  The NYT opines that such a regulatory move willfavor domestic car makers, who are already producing more efficientcars, than the multinationals.

Meanwhile, as global crude oil prices climb about $60 per barrel, the NDRC has raised fuel prices,marking the third price adjustment this year (in China, gasoline anddiesel prices are fixed by regulators, but regulators are embarking onmuch needed price reform to loosely link domestic prices loosely toglobal crude prices).  As of June 1, the benchmark retail price for gasoline will increase by 7% and the price of diesel by 8%.

Why have crude oil prices risen sharply again amidst the global economic slump?  Some suggest that China’s agressive oil storage policies are contributing to the upward pressure in oil prices.

Consolidation in China’s auto sector is taking foot as three auto parts makers mergeto create an industrial conglomerate in Shandong province with salesprojected to exceed 100 billion yuan by 2012.  Separately in Chongqing,Chang An Auto is leading a newly formed consortium of 30 automakers,components producers and research institutes, the alliance is aimed atbuilding the largest new energy vehicle research and development,manufacturing and application base.

China’s global ambitions for its auto sector, as if itwasn’t already clear, just stepped up a notch with news thatbeleaguered General Motor’s Hummer brand might be bought over by little-knownSichuan Tengzhong Heavy Industrial Machinery Co., Ltd.  As odd as thissounds, it could be a real oportunity to green-up the Hummer.Tengzhong’s CEO Yang Yi is quoted in a statement:

We will be investing in the Hummer brand and itsresearch and development capabilities, which will allow Hummer tobetter meet demand for new products such as more fuel-efficientvehicles in the U.S.

Manwhile, Shanghai has released details of subsidies it will offer for “new energy vehicles” under the 13 city new energy car subsidy program.

China is poised to become the world’s largest market for urban rail transit construction.  The NDRC has approved a new wave of mass urban rail transit plans for 19 citiesthat will see a total of 2,100 km of rail lines laid by 2015.  Theprojects will cumulatively require an investment of 800 billion yuan($117 billion). At present, ten cities – Beijing,Shanghai, Guangzhou, Tianjin, Chongqing, Nanjing, Wuhan, Changchun,Shenzhen and Dalian – have 29 urban rail routes, totaling 778 km, inoperation. Currently in construction is 1,212 km of raillines across 14 cities are building 46 urban rail lines.  In addition,9 other cities have submitted plans that are pending approval. A case in point is Tianjin, which has just one line stretching 70 km.  By 2020, it plans to have 11 lines stretching 470 km.

On high-speed long distance rail, tracks for the first high-speed passenger line in its western regionhave been laid for a 500-km line linking Xi’an in northwestern ShaanxiProvince with Zhengzhou in central Henan.  Runningup to a speed of 350km/h, the line that will ultimately shorten trips between the ancientcapital of Xi’an and Beijing to four hours from the current 11.

A subsidiary of China South Locomotive and Rolling Stock Corporation Limited (CSR) has obtained contract to supply for subway vehicles in Singapore, my hometown.

Grid and Power (and CCS band-aid)

China’s power consumption is down 4.03% for the first four months this year compared to the same period last year.  Liaoning’s ailing steel and cement plants are probably contributing to this trend.

Huaneng, one of the Big Five utility companies, has received the nod by NDRC for its second wind project, a proposed 199.5 MW wind farm in northern Gansu at the projected cost of 2.037 billion yuan ($298.5 million).  Meanwhile, Siemens breaks ground on a turbine-manufacturing facility in Shanghai.

In solar, feed-in tariffsmay be on the way! In other news, China’s Yingli Green Energy(NYSE:YGE), Amtech Systems (Nasdaq:ASYS) and the Energy Research Centreof the Netherlands will collaborateon developing next-generation high efficiency solar cells.  The jointproject is intended to help develop and implement high efficiencyN-type solar cells, codenamed “Panda” by the three, at Yingli’s pilotproduction line in Baoding, Hebei province.

China State Grid has stated their intentions to build a “massive smart grid project” by 2020. Details are sparse, but is is already known that the State Grid isinvesting 300 million yuan through($44 billion) 2012 and 600 millionyuan through 2020 to deploy ultra high voltage (UHV) transmissionwires, which significantly reduce line losses compared to conventionaltransmission wires.

Is China rushing too much to double its current hydropower capacity to 300 GW by 2020?  A U.N report blows caution to China’s dam-building spree along the Mekong for its environmental and social impacts.  Elsehwere, Premier Wen Jiabao has again suspended construction on the Liuku power station on the Nu River,reportedly only one of two rivers in China that have yet to be dammed,until after a thorough study of the hydroelectric dam’s potentialenvironmental impact.  Human safety is another dimension of hydropower(especially for rural dams built earlier) that is problematic, as this piece shows.

The World Bank approved a loan of $80 million to help China increase the development and utilization of coal bed methane and coal mine methane. Good timing, since new large coal deposits were just found in Xinjiang.

This is huge and really deserves its own post, so maybe I’ll try to get a guest writer on this–water prices in Beijing may go up to promote conservation, the fifth price hike since 2001.

One year into the nationwide ban on free plastic bags (note that it is a ban on giving out free plastic bags, not a blanket ban on plastic bags), plastic bag use has reportedly dropped by 75% in supermarkets.  A separate survey suggests that the nationwide decline is 66%,translating to the avoid use of some 40 million bags.  Over time,savings of such scale will certainly adds up to buig reductions in theconsumption of petroleum, of which plastic is a derivative product of. It is reported that one of the unintended consequnces of the ban,however, is an increased demand for trash bags, and that theauthorities are currently trying to write up standards for trash bags. Its a puzzling effect because I am not sure that there is a practice ofhanding out free trash bags to begin with.  In any case, Hong Kong is going to take the Mainland’s lead by requiring registered retailed to charge a minium of 0.5 HK dollars (0.06 U.S. dollars) for each shopping bag from July 7.

Down south in the special autonomous region of Macau, a new bureau responsible for environmental promotion and protection will be established.  Can’t argue with capacity building.