Will grid parity change everything for solar industry?

Many in the solar power industry and the investment community believethe arrival of grid parity—the point when cost of electricity generatedby a rooftop photovoltaic (PV) cell system is equivalent to thatpurchased from an electrical utility—will mark a major inflection pointfor the market that will deliver a huge increase in growth.

However,even when true grid parity arrives, it’s unlikely to generate an abruptrise in solar system installations due to the high upfront costs andthe long-term return of investing in a rooftop photovoltaic system,according to iSuppli Corp.In fact, growth is set to moderate during the years when grid parityarrives for various regions of the world as the industry enters a moremature phase.

Following a dip in growth in 2009, photovoltaicinstallations measured in terms of megawatts are expected to rise at aCompound Annual Growth Rate (CAGR) of 72.4 percent from 2010 to 2013.During the period from 2010 to 2020, when grid parity is expected toarrive in many nations that are leading in solar-energy installations,the CAGR will slow to 20 percent.

Parity apparent
Whilethere are many definitions of grid parity, iSuppli characterizes it asthe point when an investment in a rooftop solar system delivers a 100percent return on investment in five years. Furthermore, debtsincurred, i.e. negative cash balance in the investment in thesystem—must never exceed 25 percent of the total cost of theinstallation.

“The market is likely to make a smoothtransition, with demand progressing through the arrival of grid parityin an evolutionary way. This is because users must still make aninvestment in advance and the wait for the return over a long period oftime. A lot of this has to do with psychology. It takes a high level ofcommitment to invest in a solar system that is expected to operateduring a period of 30 years.”

Because of this, global PVinstallations are expected to rise in smooth fashion, even when gridparity arrives in certain nations of the world. The major factordetermining the growth of PV installations will be the supply/demandbalance, which will dictate pricing.

Solar market to recover from Spanish flu
GlobalPV installations are expected to decline by 32.3 percent in 2009 toreach 3,546 megawatts, down from 5,235 in 2008. However, the 2009decline is due to a single event: a sharp decline in expected PVinstallations in Spain.

Spain accounted for 50 percent ofworldwide PV installations in 2008. An artificial demand surge had beencreated in Spain as the time approached when the country’sfeed-in-tariff rate was set to drop and a new cap of 500 Megawattsloomed for projects qualifying for the above-market tariff. This set awell-defined deadline for growth in the Spanish market in 2009. 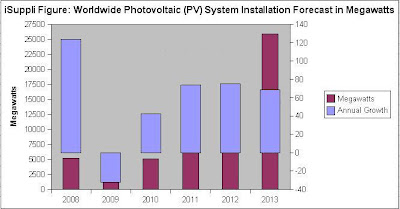 Waiting for parity
Differentcountries are expected to attain grid parity at different times, due tovarying factors including sun exposure and the cost of utility-providedelectricity.

“The country that is probably closest to reachingthis standard is Italy,” Wicht said. “Italy has high electricity rates,and low system prices. It also has a high exposure to solar radiation.

However,even in this nation, the elapsed time to the cash break-even point isnow about 14 years. Furthermore, debt for a system installed now willreach 35 percent of the net system price.”

Thenext closest nation to reaching grid parity is Germany due to the highcost of electricity and the availability of low-cost solar systems inthe nation. However, Germany is not set to achieve grid parity until2018, according to iSuppli’s definition.

However, these events are not likely to spur a major rise in solar installations.

“Thedefinition of Grid parity is imprecise, making it easy to call it theholy grail for solar,” Wicht added. “As solar system prices willcontinue drop and public incentives will allow to obtain Return oninvestment of 5 to 10 percent over 20 years, Solar Penetration willrise like any other market, with early adopters and late adopters. Themarket is at an early stage in terms of penetration. Penetration ofsolar systems will progress like any other market.”